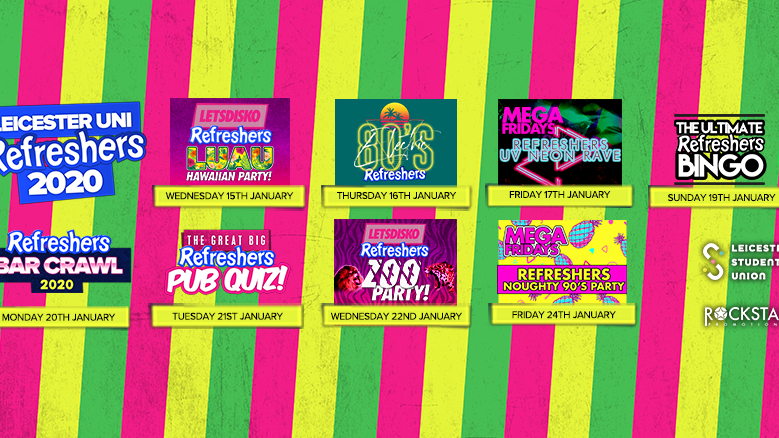 Leicester Uni Refreshers 2020! 👉 Get your Refreshers Wristband for ONLY £11 from SHOP! or www.rockstarpromotions.co.uk 💥

IMPORTANT! If you have purchased (and haven’t collected yet)/or are going to purchase a Refreshers Wristband on-line this evening, YOU CAN collect it on the door to O2 Academy tonight!

WRISTBANDS WILL SELL OUT SO GET YOURS EARLY!

We enjoyed Freshers’ so much that we just couldn’t help ourselves; we’re doing it all over again! And this year we are offering you the most unbelievable value Refreshers package ever!

After last year’s SELL OUT Refreshers’ events, this year we’re taking things to the next level, as we throw Leicester Uni’s BIGGEST & BEST VALUE REFRESHERS WEEK EVER! We bring you 8 events as well as 10 days of free Nandos!*

*Your wristband gets you an amazing deal from our friends at Nando’s Granby Street, where you can get lots of free chicken for 10 whole days (Sunday 12th – Thursday 16th Jan & Sunday 19th Jan – Thursday 23rd Jan).

Entry to all venues included in Refreshers Wristband.

We’ve come up with THE PERFECT WAY TO CURE THOSE REFRESHERS HANGOVERS! 10 Days of Free Chicken! From Sunday 12th January until Thursday 16th January inclusive AND from Sunday 19th January until Thursday 23rd January inclusive, by simply showing your wristband when you order, Leicester Uni Refreshers Wristband holders can get a FREE ¼ CHICKEN (or vegetarian equivalent) AS MANY TIMES AS THEY LIKE at Nando’s Granby Street!

All you have to do is spend a minimum of £7.50 on sides/drinks etc. per visit. SO THAT’S LUNCH AND DINNER SORTED FOR 10 DAYS!

► 1 Wristband Gets you ENTRY TO ALL EVENTS as well as the NANDO’S OFFER!

DON’T MISS OUT – GET YOUR REFRESHERS WRISTBAND NOW!

BE PART OF LEICESTER UNI HISTORY